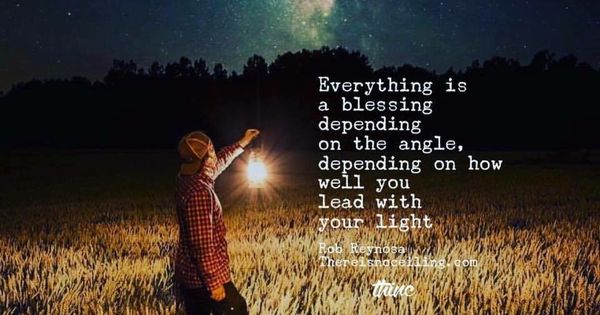 Ya know how you can hear or see something like a million times, and then suddenly you are hit with a profoundness about it?

Well, that’s what happened to me around the area of complaining when a group of us were role playing at the Saturday class focused joy.

Two people can go through the same adverse event, and one can interpret and then respond to it in one way, and the other person has a totally different idea about it and responds in the totally opposite way. One can see only the negative aspects, but the other one is able to extract the blessings. Same event, two different perspectives and responses, one spiraling downward, the other spiraling upward. Which person do you want to hang out with? Which person do I want to be?

It reminds of the Zen parable of the Chinese farmer…

Once upon a time there was a Chinese farmer whose horse ran away. That evening, all of his neighbors came around to commiserate. They said, “We are so sorry to hear your horse has run away. This is most unfortunate.” The farmer said, “Maybe so, maybe not.”

The next day the horse came back bringing seven wild horses with it, and in the evening, everybody came back and said, “Oh, isn’t that lucky. What a great turn of events. You now have eight horses!” The farmer again said, “Maybe so, maybe not.”

The following day his son tried to break one of the horses, and while riding it, he was thrown and broke his leg. The neighbors then said, “Oh dear, that’s too bad,” and the farmer responded, “Maybe so, maybe not.”

The next day military officers came around to recruit all the able-bodied boys into the army, and they rejected his son because he had a broken leg. Again, all the neighbors came around and said, “Isn’t that great!” Again, he said, “Maybe so, maybe not.”

The parable continues in the same vein. It’s really not wise to judge something as good or bad since we never know how things will ultimately turn out anyway. What is accomplished by judging, by complaining? They are of the ego and not helpful or uplifting energetically. So I say, why not treat everything as a blessing?!

I’m tired of hearing myself complain. The act of complaining is the result of one way to look at things. I’m silencing that voice and choosing to see only the blessings. It is a much better, alternate way to respond to life, uplifting to my own soul and to those impacted by my thoughts and responses. And, who wants to be around complaining, negative people anyway?

“We are all being called to step up and contribute to the bettering of the world.

My choices contribute to the uplifting of the planet. Complaining will not achieve that; recognizing blessings will.