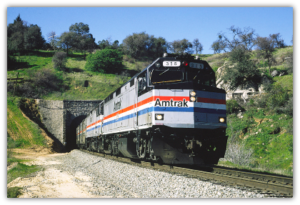 I went to college not to get prepared for a specific career (I had no clue what I wanted to be when I grew up), but simply to gain more knowledge. I completed a major in sociology, a second and more beloved one in philosophy, and also a minor in psychology. So what job did I accept when I graduated? I became the assistant supervisor for North American tours at a wholesale travel agency, assigned to the rail division.

A whole new world opened up to me, and I fell in love with trains and wanted to work directly for a railroad company. I applied for jobs throughout the country at a time when small passenger lines still existed. I ultimately landed a job right at home in NYC at Amtrak, recently established through the consolidation of 20 passenger railroads. I worked in a variety of departments, fueled by a desire to learn as much as I could about the railroad. And, I traveled as much as my schedule allowed, even getting to ride in the cab with the engineer from time-to-time. Engineers had a love for trains, took their job seriously, and were adamant about getting their passengers to their destination safely and on time.

I had plenty of adventures, some due to the mere fact that I was a woman working in a male-dominated industry. I left for greener pastures when it became obvious I would not move up the organizational ladder. Still, my love of trains never waned.

With that background, you’ll understand why today’s Daily Guide in Science of Mind Magazine hit home to me. It was about being a passenger on a train, looking out the window, taking in the ever-changing landscape as you head toward your destination. As the scenery changes, you have to let go of it, but you can hold on to the feelings. Meanwhile, the engineer never changes the path, and brings the train home “with all the heart and soul of its true nature.”

“There is an Infinite Intelligence whose nature is love, which never changes. The Divine Engineer gracefully guides you to your destination. There may be experiences of loss along the way, requiring you to let go, but you will never lose the heart that created those connections.

“Just because the form has changed, doesn’t mean the love that guides you is gone. Trust the unfoldment of your life to the love of the Infinite Intelligence that guides the universe.”

Thank You, Spirit, for your never-ending guidance and love, for being ever present in my life.

The 20th Century Limited was the flagship train of the New York Central Railroad from 1902 to 1967, catering to upper-class and business travelers, and traveling between NYC and Chicago. During my tenure at Amtrak, the musical On the Twentieth Century, based partly on the 1930s film and play of the same name, and part operetta, part farce, and part screwball comedy, was playing on Broadway. Of course, I had to see it! In fact, I saw it twice! My favorite song from it is Life is Like a Train. It’s got a great melody, and the words are philosophical and true.